When It Will Happen The Turing Test, created in 1951, was devised by Alan Turing to resolve the conflict of machine intelligence. In the Turing test, there are three components: the judge, artificial intelligence (AI), and human opponent. The AI and its human opponent will communicate to the judge through computers, and answer questions that the judge will ask them. Then, the judge has to determine which one is the computer and which is the human. If the judge has less than a 50% accuracy rate, then the AI is able to simulate the human brain, and therefore be intelligent. 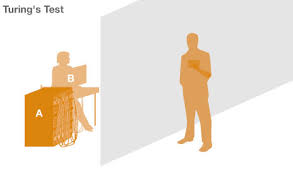 To pass the Turing Test, programmers realized that they needed to defeat one of the biggest obstacles in machine intelligence: language. Many programs were created that all had one main design. They used databases of English words and then combined that against a series of rules for making sentences. Most of these programs were unsuccessful, but some became effective and popular. One of the most well known programs was ELIZA. Created by Joseph Weizenbaum in 1966, ELIZA was made to simulate a Rogerian therapist (passive, listening, asking things like, “How does that make you feel?” etc.).

Watson
Named after IBM’s founder, Watson is a computer that was created by IBM was designed to be on Jeopardy. With artificial intelligence and analytical software, Watson is a perfect computer for answering difficult trivia questions. It is extremely fast, processing at 80 teraflops (trillion floating-point operations per second). In order to simulate a human’s ability to analyze, remember, and understand information, Watson can access 90 servers with over 200 million pages of data, which it then compares against 6 million logic rules. The entire supercomputer and its data are the size of 10 refrigerators.

Today, robots are being programmed to think, learn, and feel like human beings. Pepper, the “emotional” robot, can interact with people, judge their emotions, and react accordingly. In fact, robots today can even learn like people do.

This is Darwin, a robot who is trying to walk. Not too impressive, until you realize that Darwin is actually teaching itself to walk. This robot was programmed to simulate the human brain, and therefore can learn things. This is a huge advancement in the field of robotics, because in the future, robots could learn from new situations and become very intelligent.

Today, there are many different programs that are designed to carry out various tasks. However, the hope for the future is that there will be robots that can analyze and adapt to situations. Then, robots will be able to do many more things with less programming work. However, this requires the ability to learn, which Darwin is currently doing. In the future, robots will be able to learn more and more, and will even become more intelligent that humans.


With technology, humans will live longer, and be faster, stronger, smarter, and better that we are today. Technological singularity will happen in the near future, and it will dramatically alter human society.